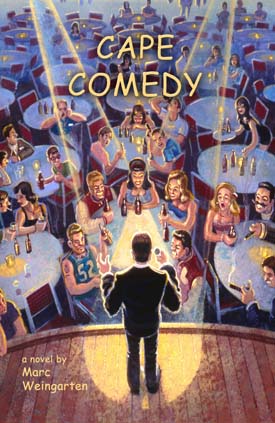 The American comedy club scene is the birthplace of fame and helps define American pop culture. It is the only place where you could witness an unknown Jay Leno, David Letterman, Jerry Seinfeld and Robin Williams carve genius from hunger.

After what seems a lifetime of living it, Marc Weingarten’s debut novel, Cape Comedy, is ready to explode the world of stand-up comedy and its underbelly into the souls of its fans and inhabitants; just not from a POV they might expect.

The long-awaited debut is finally here. Cape Comedy is not just a cover charge and two-drink minimum in exchange for an evening of laughter. As comedian Bruce Baum said in a published testimonial: “Marc has written a novel that’s Gatsby-like in the way it unveils layers of the comedy world most people don’t know exist.”

his quirky, pop culture thriller represents a deep reveal into the anger and pain from which our laughter is gifted to us. Pam Stone, the co-star of the ABC TV show Coach, said this: “If the general public had any idea of the behind-the-scenes stories that have gone on in comedy clubs across the nation … oh, Lordy. Most comics have kept our mouths shut, only because someone else has equal dirt on us to spill. Marc Weingarten, in his debut novel, unabashedly shares some of the raw truths and appallingly funny accounts in this fictional (or, is it?), comedic setting … pulled, I’m sure, from years in the biz.”

A comedy pioneer, Weingarten might be the only person with a resume that includes owning a comedy landmark, writing and talent coordinating a late night network television show, producing some of the biggest live comedy events in the country, headlining major venues as a comic, writing material for other comics, and co-founding what is arguably the most prominent comedy recording label in the country.

At 26, Marc became the youngest comedy club owner in America when he and his partners bought the historic Ice House in Pasadena, California. During that time, Marc developed working relationships with some of America’s most prominent comedy stars, agents, producers and network executives. That lasted four years when he sold his interest in the club and joined legendary L.A. radio personality Rick Dees, who asked Marc to help develop and produce The Rick Dees Comedy Concerts. That association led to seven sold-out shows at such venues as the Universal Amphitheater, Pasadena Civic Auditorium, and Long Beach Terrace Theater. Stars including Jay Leno, Howie Mandel, Brad Garrett, Ellen Degeneres, Bill Maher and Kevin Nealon were featured in Marc’s productions.

Marc went on to create the nationally reknown Sooper Bowl of Comedy, and has been a voting member of the GRAMMY’s since 1997 for producing the albums of George Lopez, Richard Jeni, Bobby Collins and Jeff Wayne.

For interviews and print reviews Marc is available by phone at 818-571-6996 and by email at marc@marcweingarten.com.