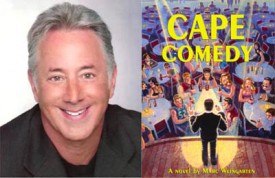 Comedian Marc Weingarten has it All to Himself with Release of New Book. Q: Tell us a little bit about yourself. How long have you been in the comedy business and where did you get your start?

I started in 1976. An extraordinary story, actually. A guy fixed me up with his wife (They had an open relationship and it was the 70′s) and our initial “relationship” actually turned into a friendship. She had a friend who owned a club in Newport Beach called the Laff Stop. She recommended me to him and I wound up owning a 1% share of the club and doing the promotion/marketing part time. But because the club was a two-hour drive the commute was impossible. So, they housed me in the same apartment they rented for the comics. For a year-and-a-half my roommates were David Letterman, Jay Leno, Bob Saget, Roger And Roger, the Unknown Comic, Robin Williams, Elayne Boosler, and whoever the comics were that performed there that week. An unbelievable experience to be able to know the minds of America’s comic geniuses in such a personal and intimate way: when they were hungry and explorative. Read more at IronEnews.com