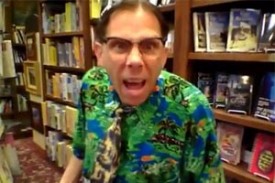 For comics, the days are mostly about fueling the nights. It’s kind of a multi-layered process where sometimes it’s about writing on your own; other times putting yourself in situations with other comics to laboratory the creativity. And then, of course, there are times when it’s none of that but simply about the need to laugh. After all, who cuts a hairdresser’s hair but another hairdresser?

When I first started out one of my great friends was Fred Smoot. As funny as he was onstage, he made me laugh even harder in the normal course of a day. He was a prankster whose road stories opening for the likes of Neil Diamond included driving a VW Van into the swimming pool where Neil and the band were sunning themselves. On this particular day Fred had this idea to go to the Los Angeles Zoo. It was the day following Fred’s appearance the night before on The Tonight Show.

Innocent enough on the surface, there was nothing innocent, however, about any of Fred’s ideas. So we called the zoo pretending to be who we weren’t: me a feature writer and Fred a photographer for the L.A. Times. We claimed we were doing an expose on American zoos. We figured it would get us in for free. It got us a whole helluva lot more than that.

We were taken to the office of Dr. Warren Thomas, the quirky and somewhat controversial zoo director whom I found to be quite affable. The interview began with Fred snapping photos and me placing a tape recorder with no tape inside it on his desk.

I started asking him questions about the California condor having no idea what I was asking. Fred, in turn, jumped on Dr. Thomas’ couch to better serve his shots. Strangely, Dr. Thomas seemed amused, if not fascinated and offered to take us on a guided tour of the zoo.

We piled into his Cadillac. First stop: the hospital where we witnessed an operation on an endangered Sumatran tiger. I usually faint at the sight of blood but my adrenalin was so elevated it allowed me to maintain consciousness. Fred, meanwhile, continued taking pictures and actually had the balls to position the surgeon for a better angle.

By now, I thought for sure we were going to get arrested and Dr. Thomas was just patronizing us until the cops arrived. I was wrong. Back in the Cadillac, Thomas drove us to the aviary and then to where the monkeys lived; the head of the LA Zoo our personal tour guide. It blew me away!

Fred asked if he could climb on the rocks and take pictures; literally mingling with the monkeys. Incredibly, Dr. Thomas allowed him to do it. So here’s Fred, bonding with gorillas when a lady noticed him and screamed: “Hey, that’s Fred Smoot. I saw him last night on The Tonight Show.”

Fred gave it no mind and continued to share bananas. I, however, was the one left standing next to Dr. Thomas, wondering whether or not I’d have a say in what color prison pajamas I’d soon be wearing. At first, he said nothing. Then he smirked, walked back to the car, put it in reverse so that he could talk to me through the passenger’s window and said: “Please ask Mr. Smoot to let me know where he’s scheduled to appear next, and if he’d be kind enough to put me on the guest list.”

A Photo Finish? Cape Comedy is a Wow Read!