webmaster Marc's On Something 2 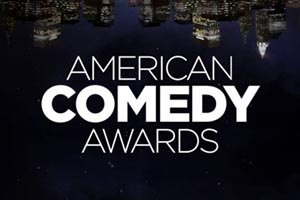 With all the award shows and all their histories, comedy finally got its red carpet in 1987 when George Schlatter produced the first American Comedy Awards at the Pantages Theater in Hollywood. Noteworthy for many reasons, it was the only time I actually attended such a gathering. I did so with my first wife, Kelly.

Finagling my tickets as the producer of the Rick Dees Comedy Concerts, I’d learn that status hardly qualified as a priority to Schlatter. Televised by ABC, the venue was arranged banquet style with round tables of ten. My table, Table 88, was the absolute worst one in the theater. Last row, as far from the stage as you can be and still be considered technically inside, we were actually closer to the tattoo parlor across the street on the other side of Hollywood Boulevard. But at least we weren’t alone. We shared the table with two stunt doubles and the guy who played Corporal Agarn on F Troop.

Fifteen minutes before show time, the announcer, Gary Owens, began broadcasting incremental warnings for everyone to take their seats. With three minutes to air, and with everyone seated in place, my wife decided to improve our status. She grabbed me by my tuxedo tail and said, “We’re moving up.”

At first I didn’t understand her. But when she stood and started walking I yanked her and said, “What are you doing? This isn’t the 7th inning of the Dodger game where you can sneak a better seat. These are assigned tables.” She didn’t care and started walking towards a better location.

I followed, horrified. We walked past Morey Amsterdam, Harvery Lembeck, Ruth Buzzi and the cast of My Three Sons. I was perfectly satisfied to sit there; we were in the 60’s row now, and in my mind we’d improved our seats enough. But Kelly probably had the mind of a woman who knew we’d be divorced soon and she actually wanted to see the show. So, she figured, what the hell?

Past Penny Marshall, past Woody Harrelson, past Lucy and Carlin and a bunch of Reiners, she advanced. Meantime, Gary Owens yelled, “Sixty seconds to air. Will the lady and the opening act hiding behind her please be seated?”

She walked to the very front table; the one touching the stage and identified as “Table 3.” She noticed two empty seats and said for everyone there to hear, “Are these seats taken?” When no one said anything we sat down.

Embarrassed, scared and frozen silent, I managed to squint a peak. Next to me on my right: Eileen Brennan. To mine and Kelly’s left: Carol Kane. Directly across from me: Bette Midler.

The show started. Lily Tomlin, the host, announced the first award: “And the winner is … Bette Midler.”

Now we’re the focus of a national audience and I saw my life pass before me. I imagined myself kicking and screaming as security carried me out: “But, Your Honor, table three is so close to table 88. Anyone could have made that mistake!”

The evening proceeded. Fueled by alcohol and those at the table winning six of the fourteen awards, merriment dominated. So much so, I finally felt comfortable enough to mingle.

Bette went four-for-four on the night. Accepting her final award, she referenced her “lucky dress” to America and returned to the table. When she did, I had a change of attitude. I thought, I have an opportunity to showcase my sense of humor to the biggest comedy star in America. So I looked at my watch and said to Bette, “We still have time to catch the ninth race at Hollywood Park. Can I borrow your dress?”

She didn’t get it and just stared. The rest of the table didn’t get it either, believing I’d insulted the Divine Miss M by comparing her outfit to that of a horse. Fortunately, Carol Kane asked me what I meant by my comment and when I told her Bette said it was her lucky dress, everyone was relieved. Bette smiled, her German husband put down his luger and Eileen Brennan started stroking my leg.

Finally, the show ended and dinner was served; pepperoni pizza courtesy of Mr. Schlatter. Just as I began eating my slice Lily Tomlin came to the table. She ate her pizza while sitting on Bette’s lap. Why? I was in her seat.

On Car Salesmen On Complaining