Marc Weingarten Marc's On Something 0 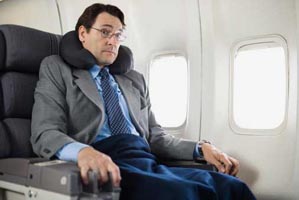 When I get on an airplane, there are some things I’d like to know about the pilot before I fly. Like his flight school grades. I think all pilots should be required by the FAA to post their report cards on the cabin door. How do I know my pilot didn’t get a “D” in Take-off, a “D” in Landing and an “A” in Automatic Pilot? That’s a “C” average and his license to say, “This is your Captain speaking.” At the very least I want to review his conduct grades. I’d hate to see a clone of me flying the plane.

I’d also like to know something about the person in the seat next to me before sharing airspace. Resumes, letters of recommendation, medical histories are all must reads. Mothers with babies should have their own section; so, too, those suffering from Irritable Bowel Syndrome.

But then there are those “luck of the draw” pairings worth the cost. I was on a five hour flight from L.A. to Miami, randomly paired with a foreign exchange student from UCLA making his first domestic flight. He introduced himself as “Omar Harabi, Hindu leader of the Jewish people.” I immediately recognized an opportunity and countered with, “Shari Lewis, Doctor of Puppets.” I became his mentor.

I told him it was customary in America for all first time flyers to introduce themselves to the rest of the passengers. Pointing to the overhead panel, I directed him to the air hose and said, “Use the microphone.” He stood up, pressed his face against the air hose and yelled, “Hello. My name is Omar Harabi and I’m an alcoholic.” I prayed, “Please God, delay this flight. Blow a tire. Send a hijacker. I need more time with this guy.”

An hour into the flight he asked me for advice. “Dr. Lewis, I am wanting a Coke. What do I do?” I told him anytime he needs anything he should just speak into the microphone. By the time we landed, he made three bathroom requests, a blanket request, four beverage requests and help on his in-flight crossword puzzle. All delivered while standing up, nose pressed against the air hose.

I had people offering me money to sit next to him for ten minute stretches. It was the only time in my life I flew for free without using any frequent flyer mileage.

On Dealin’ with the Devil On Car Salesmen