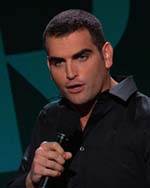 “Marc’s experience as a comic and former comedy club owner helped mentor me in the early stages of my career, and is why this book is a must read for not only comedians, but anyone that’s interested in the world of comedy!  His honest nature and truthfulness is what I admire about him as a person, and is also what makes him such a rare and brilliant writer!”