Quotes of Note from Cape Comedy 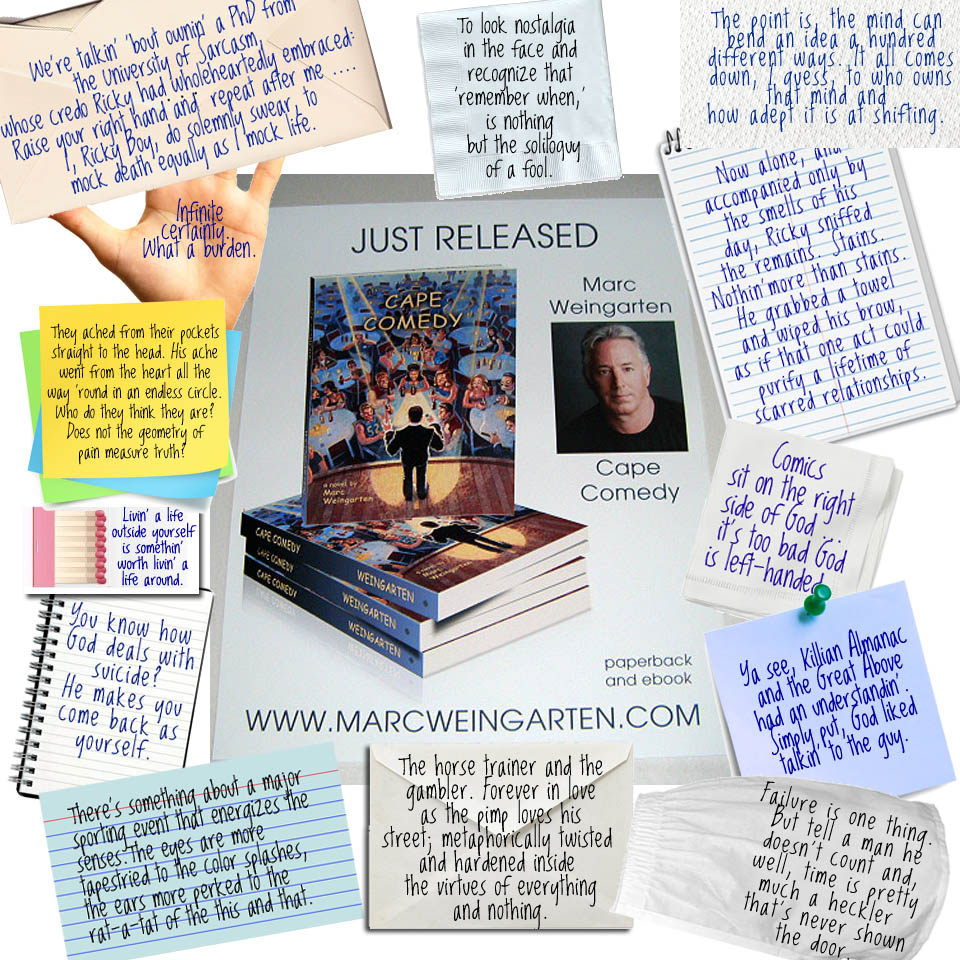 A lot of really funny bits

This book was certainly different and that was something I could appreciate! There were a lot of really funny bits, but the book was also a good thriller in is own right. I enjoyed going straight into the comedy world and while some parts were a little convoluted, as a whole, it was an enjoyable […]

A review of Cape Comedy by Sheila Trask resulted in the book’s nomination as a finalist in the Humor (Adult Fiction) section for the 2014 INDIEFAB Book of the Year. WOOT!!!

Cape Comedy is a fantastic look behind the scenes of standup comedy that will have the reader in turns belly laughing and on the edge of their seat with suspense.

The verdict: Cape Comedy is a self-contained psychiatric asylum wherein the under-medicated residents are somehow in charge. This book keeps the reader turning its pages to find an answer to the recurring question, “What the hell?”

After what seems a lifetime of living it, Marc Weingarten’s debut novel, Cape Comedy, is ready to explode the world of stand-up comedy and its underbelly into the souls of its fans and inhabitants … just not from the POV you might expect. The long awaited debut is finally here. Cape Comedy is not just […]

A Must Read for Everyone

A energetic, funny, thriller comedic detective thriller. A fantastic read from beginning to end. I found myself mesmerized from chapter to chapter, not being able to put the book down until it was finished. Marc’s descriptive style and deep knowledge of the comedy world has kept me in stitches for years. But there is also […]

Manic comedic enthusiasm bolsters the fun—even in dark moments—on every page of this debut. Peek behind the curtain at a world-famous comedy club, and what do you find? If the venue is Cape Comedy and your host is Marc Weingarten, you find murder-mystery mayhem.

If you are board with the usual murder mystery then Cape Comedy is for you. Funny, quirky, sweet and engaging. So different than any other mystery I’ve ever read. And that’s different in a great way!!! PS Can’t wait for the next book. By Adrienne Williams on Amazon.com

What a great novel

Normally I am not a book reader but this one get my attention since I know the writer personally, what a great novel! I usually read the beginning and then I get board I stop, not with this one it keep you interested in the characters. I definitely recommend it you will enjoy–after all it’s […]